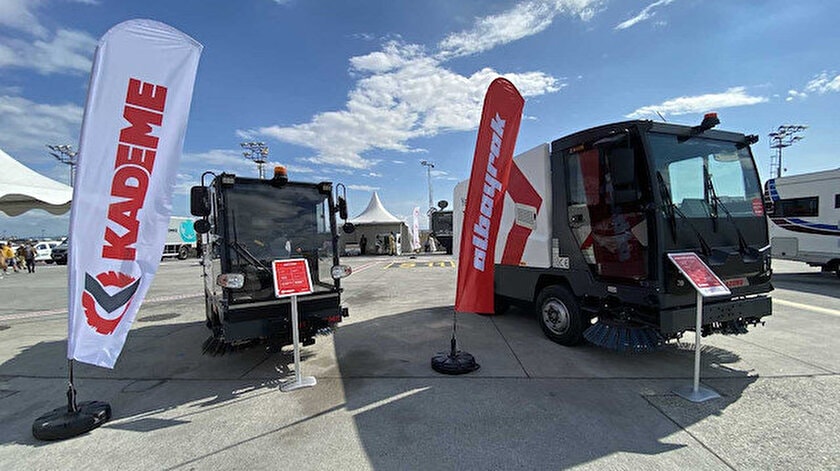 One of the Albayrak Group companies Kademe Waste Technologies A.Ş took its place in TEKNOFEST 2021 with its domestic and national road sweeping vehicles. The vehicles, which are among the first choices of the public and private sectors with the “AGA 5000” and “AGA 2100” series, attracted great attention at the fair as well.

One of the Albayrak Group companies that started to produce road sweepers and upper equipment in Konya in 2011, Kademe Atık Teknolojileri A.Ş continues to take place in the sector with the excitement of the first day. Pioneering the industry in terms of production, Kademe Atık Teknolojileri A.Ş. It has gained a large market share in the sector in a short period of 3 years with its Compact Vacuum Road sweeping vehicles, which it started to produce in 2018. It is among the first choices of the public and private sectors with the AGA 5000 and AGA 2100 series, which serve both domestically and abroad with the production of domestic road sweepers, and save up to 60 percent in purchasing and usage costs compared to imported road sweepers. .

“We set out with the slogan of domestic and national production”

Aiming to be the world leader in the sector, Kademe Atik A.Ş. Making statements about future planning, domestic Sales Manager Mustafa Cem Bilir said, “Our company, which was established in 2011, achieved great success in a short time. Again, we took our place at TEKNOFEST with two of our new products. We are presenting them. These two products are our AGA 5000 and AGA 2100 models. We set out with the slogan of domestic and national production. In 2018, our AGA 2100 model went out of production and we started selling it. In 2-3 years, we have gained a serious momentum. We are now the market leader. Again, the sale of AGA 5000 started this year and we are planning a serious acceleration in it as of next year.

“We have become the leader in the market”

In Turkey, there is a domestic market rate of up to 86 percent. From the past to the present, imported machines were taking their place in the Turkish market. With our entry into the sector, we significantly reduced the market share of imported products in Turkey and became the market leader. We work with nearly 50 countries. AGA 5000 and AGA 2100, our work on the export of these two models continues at full speed.”